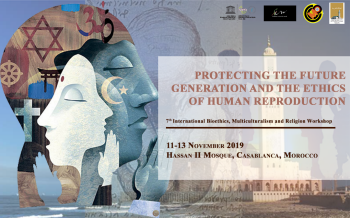 UNESCO Workshop on Bioethics and Religion

I recently had the opportunity to attend the 7th International Bioethics, Multiculturalism and Religion Workshop, held at the Hazam II Mosque’s Médiathèque in Casablanca, Morocco on 11-13 November 2019. Every moment there became an opportunity for academic and personal growth.

The workshop brought together twenty-five experts from seven religious and secular traditions to talk about the ethics of human reproduction, with a special focus on prenatal testing, preimplantation genetic diagnosis, and maternal surrogacy. The conference was divided into ten sessions, two introductory ones, a panel for each religion and tradition, and a concluding session. Each panel on religion included two talks by experts on the tradition and commentary by an expert from another tradition, followed by an hour of open discussion.

Through the talks, I learned the different points of view on ART that exist within other traditions, and they introduced me to some of the bases of their ethical systems, core values and understandings of the human person. I was also surprised to see how some traditions had little to no material from their ancient cannons to work on in relation to this topic, but the speakers skillfully connected points from related topics and presented conclusions and recommendations. The open discussions were, however, the richest parts of the sessions. We all enjoyed watching the members of a given tradition debate opposing conclusions and often being confronted by the respectful yet daring questions raised by the audience. One of the best discussions came after the panel on Judaism and ART. The main speakers used scriptural sources and stories to develop guidelines on these modern technologies. The main speaker raised questions on existence and non-existence and the moral status of not-yet-existing human beings. The entire audience became very involved, and the excitement was palpable.

The workshop also included a cultural component, organized by the Moroccan art initiative “Come to My Home.” Their work included a visual art exhibition and two musical presentations based on mystical poetry and music from different religions, with a special focus on Islam. The artists weren’t only very talented, the nature of their presentations also served as great conversation starters at the dinners. Through the conference, we were also accompanied by the director of Fondazione Marianna, an Italian non-profit that uses art for the promotion of human rights.

While all these organized events proved to be very fruitful, I learned the most by talking with speakers and fellow attendees in our free time. I met many wonderful human beings who were also passionate about their work. Each moment of free time became an opportunity to meet someone new and talk about bioethics, the meaning of life, and each’s cultural background. One of these memorable encounters occurred with a Confucian scholar who trained on contemporary virtue ethics at my university, the University of Notre Dame. I never expected a tradition that always seemed so distant to share this interest with Christianity. I also had several great conversations with different experts on Hindu philosophies, learning about each other’s understandings of ascent and the perception of the supernatural. Finally, I also enjoyed some great discussions on St. Maximus the Confessor and global bioethics with an Orthodox scholar. Many other conversations revolved around mysticism, negative theology and whom or what that lies beyond human understanding. These personal interactions were, by far, what I was most grateful for through the conference.

Finally, I was astonished by the environment of welcome and mutual respect that permeated the conference. Some of the organizers from the UNESCO Chair said, in their introductory remarks, that the key for holding open and respectful dialogues in these workshops was friendship. Recurring attendees had evidently built deep friendships among each other despite–or perhaps because of–their radically different worldviews. The newcomers were amazed at how honest conversations were, and how everyone felt welcome to share their thoughts and opinions. It was fascinating to see sessions of intense discussions followed by kind and amiable conversations during the coffee breaks. The workshop was a great example of a fruitful intercultural encounter open to dialogue. This workshop proves that true dialogue and encounter are possible, and it is a great model for any other interreligious and intercultural events to follow.