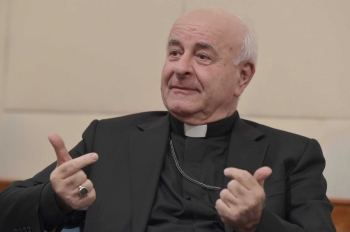 Rome, November 21.- «The topic of organ and tissue transplants is of particular interest for the Academy for Life, both for its medical-scientific value and its ethical-anthropological meaning». This was highlighted by Msgr. Vincenzo Paglia, President of the Pontifical Academy for Life, this afternoon in the opening address of the 43rd National Congress of the Italian Society of Organ and Tissue Transplants which is being held in Rome (Policlinico Gemelli) from the 21st to 23rd of November.

The value and importance of the "donation" of organs and tissues is underlined and recognized by St. John Paul II (1995 Encyclical Evangelium Vitae) and Benedict XVI (2008, Address to the Pontifical Academy for Life). In this sense, Msgr. Paglia listed the ways in which "the link between donor and recipient is expressed." "In living donation, the donor offers an organ because of the bond–of blood or emotional–with the recipient; for example, a parent donates to his child, a wife to her husband. In the donation from a corpse, the donor–and, when this is not expressed, the right-holders–donates to the community, which, through appointed agents, distributes the organs according to specific parameters. The donor does not choose who the recipient will be, he does not know him. Finally, there is a donation method called the Good Samaritan. A living subject donates his organ without knowing who the recipient will be, which will be chosen according to criteria established by the scientific community."

With organ transplantation "something is realized that reveals one of the central dimensions of living: the dimension of gratuitousness." Instead, "every action tending to commercialize human organs or to consider them as units of exchange or sale, becomes morally unacceptable because it violates the same dignity of the person".

In his speech, Msgr. Paglia has included the dimension of the gift within a broader vision of human relations. Giving "is not a heroic choice, an exaggerated altruism", as sensationalist publicity sometimes claims. Rather, the "ordinary" dimension of the gift of donation must be emphasized: "none of us would exist in the world if life had not been given to us". It is precisely "the ‘logic’ of the gift of donation that reveals the profound truth of the human being, which is the ‘logic’ of generation, which is being, at the same time, generated and generated, because ‘to love’ means ‘to be.’" In this perspective we understand the connection between donating to those we know–living donations–and donating to the community–the corpse donation and the donation of the Good Samaritan–: it is recognizing how much we have received from each other, from others, from the entire community. It is because of the constitutive relationship to others, that in freedom we are open to the gift of donation."

References: St. John Paul II, Evangelium Vitae par. 86: "(...) the Gospel of life is to be celebrated above all in daily living, which should be filled with self-giving love for others. […] Over and above […] outstanding moments, there is an everyday heroism, made up of gestures of sharing, big or small, which build up an authentic culture of life. A particularly praiseworthy example of such gestures is the donation of organs, performed in an ethically acceptable manner, with a view to offering a chance of health and even of life itself to the sick who sometimes have no other hope.».

Benedict XVI (November 7, 2008): "Organ donation is a peculiar form of witness to charity. In a period like ours, often marked by various forms of selfishness, it is ever more urgent to understand how the logic of free giving is vital to a correct conception of life.».