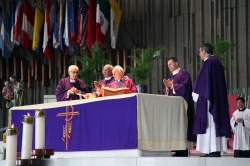 From the 13-18 of March, Archbishop Vincenzo Paglia e Msgr. Pierangelo Sequeri were in Mexico. The first part, from the 14th to the 15th, was the Mexican Section of the John Paul II Pontifical Theological Institute for Marriage and Family Sciences in Mexico City (Anahuac University www.familia.edu.mx  www.anahuac.mx). The second part of the trip was in the city of Querétaro to visit the Center for Advanced Social Research Cisav (www.cisav.mx) where a conference on Palliative Care and a seminar on Amoris Laetitia were held.

In the current academic year, 34 students for the Licence in Family Sciences are enrolled at Anahuac University; 424 students in the Second Level Masters e 682 students for the university diploma courses. Anahuac University was founded in 1964 and according to the QS World University Rankings is in the small group (2%) of the best universities in the world and is ranked among the three best private universities in Mexico. It has branch locations in Guadalajara, Monterrey, Puebla, Mérida, and Queretaro.

“It is a great honor - explains the Vice President Fr. Gaspar Guevar, LC - to receive for the first time the visit of the Grand Chancellor of the Institute. We greatly appreciate the work of Archbishop Paglia to support the family, first at the Pontifical Council and now at the Pontifical Academy for Life. We know his commitment to promoting the Culture of Life of which the Holy Father John Paul II spoke of and to overcoming the culture of waste that Pope Francis now speaks of. The threats to life from beginning to natural end always further incite us to listen attentively to the message of one of the Pope’s closest collaborators on such important and urgent issues. Mexico City, who receives Archbishop Paglia, has had the most permissive abortion law in the country for 20 years and has been the first city in Mexico to legalize same-sex unions. Today we need more and more light in the face of these realities and complex issues.”

On March 14, speaking on the theme “Challenges of the Culture of Life,” Archbishop Paglia noted that in the face of “manipulation of the human” produced by a technology that becomes absolute knowing, the Church reiterates the importance of the “quality of relationships,” above all at the moment of the beginning of life, when parents, strong in their relationship, give meaning to the birth of a child and insert their family path into God's plan in history. Relationship is the antidote to the technocratic model, Archbishop Paglia observed, and “"perhaps it is not by chance that the areas of the planet in which there is a negative demographic dynamic (winter) are those in which this technocratic logic is more present and practiced.” Therefore, it is necessary to insert classical medical bioethics into a broader reflection, so as not to limit ourselves to the problems of advanced countries. Indeed - observed Archbishop Paglia - it is “increasingly important for us to move towards a vision of Global Bioethics” because of “the need to interpret in a new light the questions on access to care, priorities that address the use of resources, inequalities in health promotion, and the role and distribution of technologies and knowledge that make possible the use and development. The introduction of the reflection on the environment, which constitutes one increasingly incisive component in the determination of health, is also of great relevance.” The Church has a “historical task” of “importance”; it is “a question of life or death”--that of being able to "recompose knowledge and affections". In concrete, theology "has the task of restoring the alliance of man and woman to the breadth of the original creative design that entrusts the world and history to their understanding.” The conjugal alliance is a sacrament, but "it does not end with marriage" and must involve all sectors of society: men and women must "achieve a mutual understanding at all levels: society and work, knowledge and education, economics and politics.”

March 16-17 in Querétaro, at the branch of the Center for Advanced Social Research Cisav (www.cisav.mx), Archbishop Paglia presented the “White Paper” for Palliative Care, announced at the end of the International Congress held in Rome on February 28 and March 1 and organized by the Pontifical Academy for Life.

On March 17 Archbishop Paglia and Msgr. Sequeri spoke at a seminar on the Apostolic Exhortation Post Synod Amoris Laetitia.

Followed in Italian and Spanish:

Abp. Vincenzo Paglia was appointed President of the Pontifical Academy for Life on August 15, 2016.

Abp. Paglia about the Encyclical Letter: Fratelli Tutti. Fraternity will resuscitate us

How to rebuild Pace and Justice