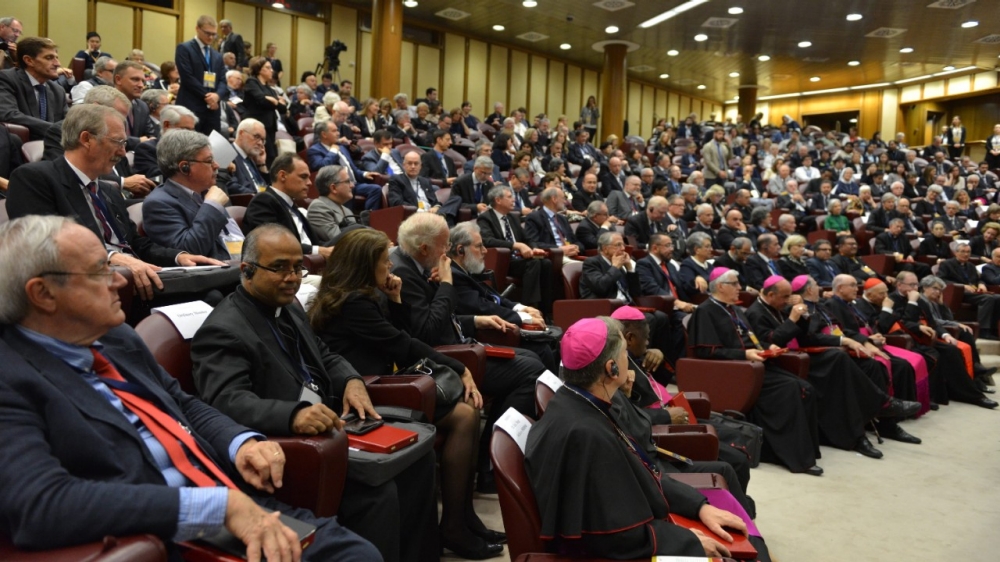 Vatican City, October 5 2017 - On Thursday afternoon in the Vatican, the Assembly of the Pontifical Academy of Life (Pav) has come alive.

The President Archbishop Vincenzo Paglia gave the introductory report to the works, stressing that "it is necessary to recover a larger dimension of life, against any reductionism". "Life is not an assembly code, but is the attitude to live interpersonal relationships between man and woman. Their generative alliance is an integral part of the experience of human life and is the guidance of the whole story. " According Archbishop Paglia more than ever is required to ask "what we can and should call human life today" in the face of the continuous advancement of science.

With this premise the discussion came alive on the topics of medically assisted procreation with the report of prof. Adriano Pessina, director of the Bioethics Center of the Catholic University of Milan. “It is necessary to understand that the reasons for third-party reproduction realized through techniques substituted for the reproductive act—to use the aseptic language of medicine—are not able to completely respect the uniqueness of human procreation. The interpersonal relation between a man and a woman is irreplaceable because it is connected with the fact that the child is not simply a product of a fertilization but a personal subject that has the potential for growth and development. With the act of procreation begins a new story of personal life, and the context is not merely biological. Once accepted, third-party reproduction changes the place of procreation; it is no longer the womb of the mother, but the laboratory. Furthermore, it changes the “moral agent”; it is not the man and the woman, but the doctor and the biologist.  (…) It is necessary to re-open the original question of man’s identity, and what actions, languages, and ethical categories are able to protect the transcendence of man over technology”.

Speaking in response to prof. Pessina, Roberto Dell'Oro (Loyola Marymount University in Los Angeles) noted that “In the flesh that nourishes our joy and suffering, pain and pleasure, lies the trace of the source that releases us into being, the subtle allusion, most often forgotten, at times denied, of the gift that we are, not from ourselves, but from another.  Some call this other the mystery of life.  We dare to call it God”.

Graciela Moya, from the Catholic University of Buenos Aires, put a question to the assembly at her basic point of view: "If parents accept to conceive their children through assisted procreation techniques then what motivates them to resort to third parties? Why do they accept that embryos are frozen or discarded or donated for research? ". The hope "is that the moral connotations of the medical act will be not lost".

About Parenthood, Helen Watt (Oxford Bioethics Center) has spoken about the universally acknowledged importance of genetic connections, as well as social ones. “It is crucial that parenthood be treated as a ‘given’ and that keeping biological parents and children together be the clear default position. That way, children feel accepted unconditionally, have access to information on their personal and family history and generally know where they come from as they forge their own new lives. The normal parental meaning of pregnancy itself is extremely valuable. Children should be conceived already in a bodily, interpersonal relationship with their mothers (who are their guardians in a special sense) through a bodily, interpersonal act of love between their fully-committed parents. In responding to the needs of offspring conceived via assisted reproduction, we must distinguish between the great value and dignity of the person’s life, and the dehumanised, mechanistic means of conception which does not reflect that value and dignity as it should”.

Reflecting on this approach Chiara Giaccardi, professor of Anthropology and Media Sociology at Catholic University, noted that "You can always bring children to the world without being really parents, or be real fathers and mothers without blood bonds. The desire for parenthood can take many different forms, which are not 'surrogate' more than a rent uterus. The movement of manufacture through abstraction, to dominate, is opposed to that of creating in concreteness, opening to what is another, interpreting, renewing in directions we did not foresee, to which we rely. " And finally Carter O. Snead (Notre Dame University- Indiana) spoke about the importance of adoption. “Adoption is the creation of family through love and shared history rather than through biological generation.  It is the grafting of a child on to a new family tree, situating her in a new relation to generations before and after. It is welcoming a new member of the family – a place of belonging and unconditional love”.