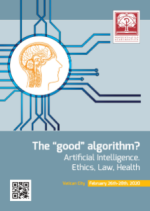 The Rome Call for AI Ethics

The 2020 Workshop is also following on from the 2019 gathering on Roboethics.

The fields of robotics and artificial intelligence are distinct, but closely related. They both contain so much information and so many anthropological and ethical questions in themselves that we are dedicating two assemblies to these subjects. We hope that, by having two different assemblies dedicated to two different aspects of the larger field of robotic technologies in general, we can address the opportunities and challenges of these inter-connected technologies in greater depth.

The President of the Pontifical Academy for Life, Abp. Vincenzo Paglia, notes that “in these last number of years the Academy has shown a specific interest in new technologies, dedicating the two-year period 2019-2020 to robo-ethics and to ethical-anthropological questions connected to the so-called artificial intelligence. The Academy is working in relation to what was requested by the Pope, who urged the Academy to enter the territories of science and technology and to follow them with courage and discernment”.

“The Pope Video” for November has been released with a message about the progress resulting from advances in robotics and artificial intelligence. Francis emphasizes the need to orient it “towards respecting the dignity of the person and of Creation.”

(Vatican City, November 5, 2020) – The Pope Video for November has just been released with the prayer intention that Francis entrusts to the entire Catholic Church through the Pope’s Worldwide Prayer Network (which includes the Eucharistic Youth Movement – EYM). This month, the Holy Father calls our attention to the epochal change that humanity is experiencing thanks to advances in artificial intelligence. For Francis, this progress should always “serve humankind,” respecting human dignity and taking care of Creation. This edition of The Pope Video was made with the support of Enel, a multinational energy company and one of the principle players in world markets for energy, gas, and renewable energy.

It is not news that, in recent years, Artificial Intelligence (AI) has advanced exponentially, as evidenced by its many applications in different fields of knowledge. Today, 37% of organizations in the world have implemented AI in some way (which represents a 270% increase in the past four years).

Pope Francis clarifies that this progress, as well as that in robotics, “can make a better world possible if it is joined to the common good.” In this sense, he hopes for technological progress that does not increase the inequalities in society; if it does, it will not be “true progress,” one that takes into account the dignity of the human person and care for Creation.

Artificial intelligence is capable of addressing many problems facing humanity: among others, it can evaluate the learning capacity of students, in order to detect opportunities for improvement; it can help people with visual or hearing impairments by developing better communication tools (such as converting text to speech or speech to text); and it can speed up the collection, processing and diffusion of health data to improve the diagnosis and treatment of patients, especially those living in remote areas. The same applies in the field of ecology: for example, thanks to artificial intelligence, it’s possible to analyze data on climate change and create models that can help predict natural disasters. It also can be used to create intelligent and sustainable cities: by reducing urban spending, improving the resilience of highways and increasing energy efficiency, among other things. There are vast possibilities for using this technological progress for the common good, and this video, put together using images from Enel and the Italian Institute of Technology, shows some of them.

Let us pray that the progress of robotics and artificial intelligence may always serve humankind.

Artificial intelligence is at the heart of the epochal change we are experiencing.
Robotics can make a better world possible if it is joined to the common good.
Indeed, if technological progress increases inequalities, it is not true progress.
Future advances should be oriented towards respecting the dignity of the person and of Creation.
Let us pray that the progress of robotics and artificial intelligence may always serve humankind… we could say, may it “be human.”

Abp. Paglia about the Intention of Prayer

“Innovation,” says Enel’s CEO, engineer Francesco Starace, “has placed at our disposition extraordinary tools that we need to be capable of using in the best possible way. As Pope Francis reaffirms, it is our task to ensure that the resulting benefits are distributed fairly and create opportunities and wellbeing. In order to give a positive orientation to our actions and choices regarding the present and the future, we must put respect for people and for the environment at the center, adopting a vision based on sustainability. Only in this way can technological evolution be an ally of humanity and create opportunities which, up until a few years ago, we couldn’t even imagine.”

Fr. Frédéric Fornos S.J., International Director of the Pope’s Worldwide Prayer Network, says, “The transformation of our societies also transforms our work. These are rapid changes that we have to direct so that they will be for the good of all. This prayer intention reinforces the idea that the benefit that humanity has obtained (and will continue to obtain) from technological progress must always take into account as well, and in parallel, ‘adequate development of responsibility and values.’ This is how the Pope expressed it in his encyclicals Laudato si’ and now in Fratelli tutti: ‘How wonderful it would be if the growth of scientific and technological innovation could come with more equality and social inclusion!’. We know that artificial intelligence, robotics, and other applications of technology open great challenges for ethics and social justice. This is why the Pope’s most recent petition is important: to pray that this progress will always ‘be human.’