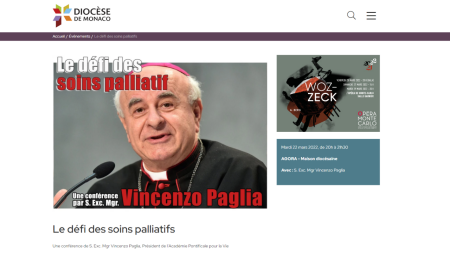 I thank you for the invitation to this meeting on the theme "Construire une culture de la responsabilité sociale: le défi des soins palliatifs". The first part of the title refers to the broad theme of human fraternity and the social forms which manifest it in history. Social responsibility means that "we" as society have a task, entrusted to every human being and particularly affected by the unbridled individualism that characterizes post-modernity: everyone, no one excluded, has the responsibility to participate in the construction of society.

(...) The Pontifical Academy for Life has been following the development of palliative care with great interest. By launching the PAL-LIFE Project in 2017, we intended to take on the challenge posed by the fragility of advanced and terminal illness. In 2018, we promoted a major International Congress resulting in the publication of the White Book for Global Palliative Care Advocacy, intended for all those who may have a role in promoting palliative care and translated into several languages. In that booklet, it becomes clear that the scope of palliative care is broader than traditional medical practice. The authors of the White Book, who are among the world's leading experts in palliative care, show that the issue of human life cannot be reduced to a biological question, at best with heavy economic implications. If there is one area where it is clear that medicine is perhaps the most humanistic of sciences, it is in the area of palliative care.

I would like to recall the congresses in India, in the United States, in Latin America, in Qatar and in several European countries, up to the last webinar called "Palliative care. An international lab", carried out with great success of participation and interest last February. I am also thinking of a particularly significant event: the signing of a document on end-of-life and palliative care issues by the world leaders of the Abrahamic religions. It was a high point to see representatives of the Jerusalem rabbinate alongside leaders of Arab and Indonesian Islamism sign this document in the Vatican and deliver it to the Pope. When one works for the dignity of man, the social responsibility that is expressed in gestures of communion is unthinkable elsewhere. (...)

The issue of palliative care is necessarily intertwined with the issue of death. This is a complex and particularly delicate issue, also because of the intertwining with issues related to euthanasia, assisted suicide, deep sedation, and advance healthcare directives.

I think it would be useful to pause, at least a little, to reflect on the reasons that have made end-of-life issues particularly complex. On the one hand, there are developments in medicine and new technologies that intervene in the decisions relating to the end of life in an increasingly invasive manner. On the other hand, there are cultural dynamics that insist on the centrality of individual freedom understood as absolute self-determination.

Pope Francis entered the debate by acknowledging the growing therapeutic capabilities of medicine, which "have made it possible to eliminate many diseases, to improve health and to prolong people’s life span.  While these developments have proved quite positive, it has also become possible nowadays to extend life by means that were inconceivable in the past.  Surgery and other medical interventions have become ever more effective, but they are not always beneficial: they can sustain, or even replace, failing vital functions, but that is not the same as promoting health.  Greater wisdom is called for today, because of the temptation to insist on treatments that have powerful effects on the body, yet at times do not serve the integral good of the person." (Message of His Holiness Pope Francis to the participants in the European Regional Meeting of the World Medical Association, November 17, 2017).

In my opinion palliative care, with its focus on attentiveness, on human relations, even on the elimination of pain, is a powerful and eloquent response to those who make a request to die, often caused by the fear of pain and loneliness.

The legal debate that has arisen in many countries of the world must not make us forget that what is at stake regards the field of culture. It is here, in fact, that the legal dimension and ethical dimension are combined. These two dimensions are different but not separate, connected but not coincident, and they find in culture a ground for mediation. And it is on this ground that palliative care can also make a decisive contribution. The logic of accompaniment that palliative care promotes aims to overcome the logic of death control, which is expressed through the attempt both to prolong life at any cost, and to speed up death. Thus, we see that the alternative is not necessarily between unreasonable insistence (therapeutic obstinacy) and the various ways to cause death, between absolutizing biological survival and mythologizing self-determination, both of which lead to problematic outcomes. (...) It is in the field of culture that believers can provide their best contribution, recognizing themselves, with respect to civil society, not as counterparts, but as active participants in the social responsibility that everyone is called to bear, in an attitude of mutual learning.

We are deeply committed to ensure that the debasement of death does not decide the value of life. We are committed to ensure that utilitarian criteria do not decide the value of persons. We must learn to accompany each person towards acceptance of the mortal condition that is proper to human beings. Let us resist the illusion of being able to erase the mystery of this last passage, which also involves difficult and painful contradictions.

This seems to me to be the challenge – a very difficult and very human one - that we face and that I believe we must face together. The accompaniment and the search for a human way of experiencing even death, without losing the love that fights against its degradation, are the objectives of the "responsible closeness" to which all of us, as human beings, are called. The whole community must be involved. Love for life, in which we experience being loved and learn to love, is no longer ours alone: it belongs to all those with whom it has been shared. And so it shall be, until the end.