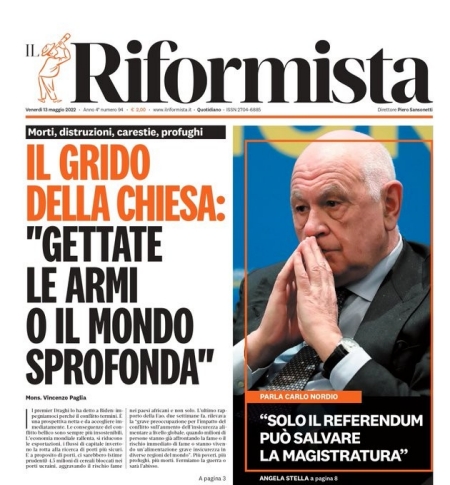 We need a vision for our future: the future of all of us and the planet. We are throwing away all the efforts undertaken after World War II. Now, after two generations of peace, we are witnessing a terrible regression. The war must end immediately. We are already facing dramatic consequences as of now. Not only on the level of international relations between two closely related neighboring countries, but also (and above all) on the level of personal relations: families and communities connected to each other are divided by a border that is a human construction between two populations united by strong religious, cultural, linguistic ties.

PM Draghi told President Biden: let us commit ourselves so that the conflict ends. This is a strong stance and one to be welcomed wholeheartedly. The signal that came from the Kremlin on May 9 is also reassuring: there will be no spill-over of the conflict. These are positive signs. We are already facing a period of great uncertainty due to the long-lasting effects of the conflict on the relations between peoples, between states, in Europe and the world. The data are alarming. In a recent hearing on the Efd, the Economic and Financial Document, the Parliamentary Budget Office sounded the alarm: if the conflict continues, GDP is expected to contract by about 1,5% in a two-year period as a whole.

At the same time, consumer prices would sharply increase by about 2.5% in the period 2022-2023 in the case of Italy. As the Huffington Post wrote days ago, the consequences of war are being felt on the Asian side of the world. In China, the manufacturing index of small private companies, which is more fragile, is below 50, the threshold which separates expansion from contraction. The global economic slowdown and the effects of the Ukrainian war reduce Chinese exports as capital flows reverse course in search of safer ports. Speaking of ports, according to conservative estimates nearly 4.5 million tons of grain were stranded in Ukrainian ports, increasing the risk of hunger in African countries and elsewhere. FAO’s latest report confirms such a risk.

It is not unreasonable to assume that the number of refugees will increase; refugees fleeing hunger from southern countries of the world will come knocking on the West’s doors. The West, meanwhile, has to cope with the problem of energy sources, with the possible return to polluting sources such as coal or the rush to acquire alternative sources, underscoring the delays of a short-sighted energy policy. Forced to provide ourselves with renewables, how are we going to implement a fast, real and effective ecological transition?

The war seems far away, although it is in Europe, and yet it is already affecting our way of life, our prosperity that seemed never-ending. War has devastating human, financial, economic, political, social, geopolitical, religious consequences. Peoples are interconnected - as early as the 1960s we spoke of a "global village" - and political shortsightedness has brought us all to the brink of the abyss. I think back to the conflict in Bosnia that was stopped thanks to a decision that was perhaps not exemplary, but certainly timely to stop the killing. Today there is still a need for a wiser political vision in that land, but peace was a reality that must still be cherished. This is the task of politics. On that occasion politics prevailed over arms. Perhaps that is an example for us today as well.

There is, however, the urgency of a wise vision that is indispensable to reach a compromise in order to end the conflict and then begin a journey - perhaps a long journey, but a peaceful one - to a just and lasting peace. We must be aware that today there are no winners in wars. It is like the famous movie "War Games": at the end of the movie the computer itself (a machine!) realizes that the global war scenario does not lead to victory but defeat for everyone. Because of the conflict we are destroying our habitat and the deadly consequences of hunger and division are afflicting tens and hundreds of millions of people around the world, as well as undermining civil coexistence.

A strong vision of politics is much needed, a firm and bold decision needs to be taken: weapons do not bring peace. Dialogue and encounter do. On Monday, May 9, Pope Francis reminded this to students from the University of Macerata, the city of Matteo Ricci, the great connoisseur and evangelizer of China, still remembered today for his ability to bring together such different cultures and worldviews and to create a dialogue between them. That was happening in the 16th century. It was possible then. It is possible today! “It is necessary to develop a culture of encounter”, Pope Francis said. He added about Matteo Ricci: “He was a man of encounters, a man of the culture of encounter, a man who went beyond being a foreigner; he became a citizen of the world because he was a “citizen of people”. This is the culture of encounter”. Moving forward to today: “How much need there is today, at all levels, to resolutely pursue this path, the path of dialogue! How the powers of the world are accustomed to the road of exclusion, to the culture of rejection! No, there is a need for dialogue, the path of dialogue. “But wasting time with dialogue?”. Yes, “wasting time”, because this then bears fruit in a greater and more beautiful way”.

Policy makers have the power to stop war. One motto should guide us especially now: weapons lead us to ruin. What is needed is a flash of inspiration, a serious commitment to reverse the process which led to a disastrous outcome because of political short-sightedness that has unashamedly ignored conflicts, sweeping the dust under the rug in the illusion that it will go away. That’s not the case. We need a new politics for humanity to have a better destiny and future, a new politics based on one profound conviction: we are all brothers and sisters among us, and we live in the same house. We must not forget that.