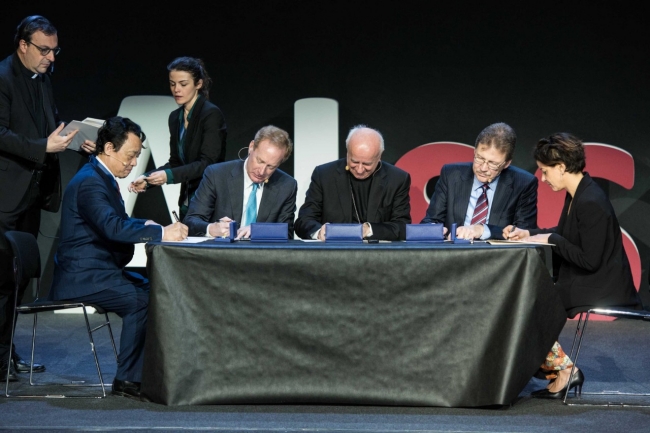 Rome, February 28th. Pontifical Academy for Life, Microsoft, IBM, FAO, the Italia Government, today signed as first  the “Call for an AI Ethics”, a document developed to support an ethical approach to Artificial Intelligence and promote a sense of responsibility among organizations, governments and institutions with the aim to create a future in which digital innovation and technological progress serve human genius and creativity and not their gradual replacement.

«The sponsors of the call express their desire to work together, in this context and at a national and international level, to promote “algor-ethics”, namely the ethical use of AI as defined by the following principles: 1) Transparency: in principle, AI systems must be explainable; 2) Inclusion: the needs of all human beings must be taken into consideration so that everyone can benefit and all individuals can be offered the best possible conditions to express themselves and develop; 3) Responsibility: those who design and deploy the use of AI must proceed with responsibility and transparency; 4) Impartiality: do not create or act according to bias, thus safeguarding fairness and human dignity; 5) Reliability: AI systems must be able to work reliably;  6) Security and privacy: AI systems must work securely and respect the privacy of users.  These principles are fundamental elements of good innovation».

During the morning Abp. Paglia has read the speech prepared by Pope Francis.

Msgr. Paglia said: "The Call’s intention is to create a movement that will widen and involve other players: public institutions, NGOs, industries and groups to set a course for developing and using technologies derived from AI. From this point of view, we can say that the first signing of this call is not a culmination, but a starting point for a commitment that appears even more urgent and important than ever before. Joining this initiative implies for the industries that sign it an engagement that also has a relevance in terms of costs and industrial contribution to developing and distributing their products. If the Academy feels called to intensify its efforts to facilitate the knowledge and signature of other international actors, none the less the Call is a first step which is a prelude to others. The Call’s text is also characterized by being a first attempt to formulate a set of ethical criteria with common reference points and values, offering a contribution to the development of a common language to interpret what is human ".

"Microsoft is proud to be a signatory of the Rome Call for AI Ethics, which is an important step in promoting a thoughtful, respectful, and inclusive conversation on the intersection of digital technology and humanity. I am inspired by his Holiness’ commitment and contributions to this important dialogue, and thank him, the Pontifical Academy for Life and the other representatives of the Holy See for today’s announcement.” – Brad Smith, President, Microsoft.

Mr. John Kelly III, Vice President of IBM has said: “AI is incredibly promising technology that can help us make the world smarter, healthier and more prosperous, but only if it is shaped at the outset by human interests and values. The Rome Call for AI Ethics reminds us that we have to choose carefully whom AI will benefit and we must make significant concurrent investments in people and skills. Society will have more trust in AI when people see it being built on a foundation of ethics, and that the companies behind AI are directly addressing questions of trust and responsibility.” 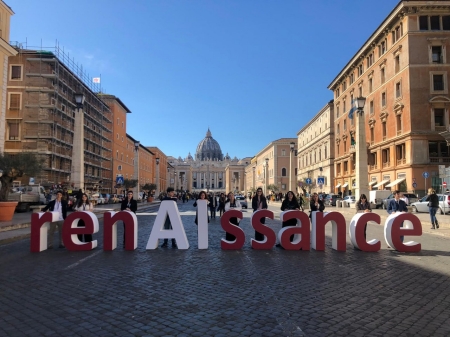 On February 28 from 9am to 1pm in the Auditorium of Via della Conciliazione 4 (Rome), morning of work and debate.

In the morning we have the signing of the Rome Call for AI Ethics.

Pope Francis from the Apostolic Palace addresses the participants in audio-video connection.