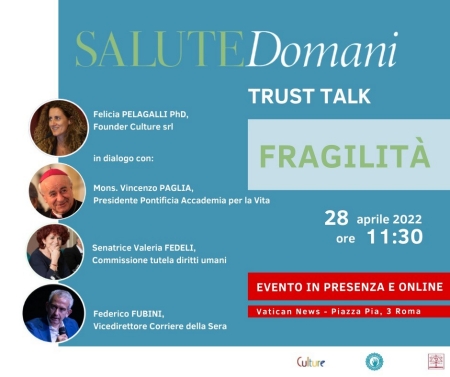 "We need to make room again for thoughts and visions: utopia is so powerful, precisely because it is frail and weak. I believe that ideas are stronger than bombs. We become strong thanks to the word.", so spoke Archbishop Vincenzo Paglia, President of the Pontifical Academy for Life, in reference to the war in Ukraine; he hoped for an immediate cessation of hostilities through the strength of politics.

Since the beginning of the new century, we have been confronted with epochal crises (financial crisis, pandemic, crisis of political models, war) that question our established paradigms, recalled Federico Fubini, Deputy Editor of Corriere della Sera. "All these crises share a common trait, they come in the form of tradeoffs, that is, painful choices to be made now in the hope of getting benefits later in time. Now with the ongoing war we have to choose whether to give up our lifestyle and economic well-being by reducing energy consumption in order to try to deprive the attacking country of resources, or not. Europe must show maturity by making clear choices, without hypocrisy."

"The European Community must act united and we must work to do everything possible to make the invading nation stop. We hope that sanctions will lead to negotiations," Senator Valeria Fedeli strongly reiterated.

The dialogue took place on April 28 within the Trust Talk "Frailty", organized by Culture and moderated by Felicia Pelagalli.

On the theme of frailty, Archbishop Paglia underlined that it is a strength "because it unites us, and therefore allows us to be stronger". Special attention should be paid to policies in favor of elderly people: "The worst enemy of old age is the very idea we have about it".

Fubini, stressing the importance of the work underway, emphasized that "We must not let the demographic problem be just a debate about care as a burden, but as a resource and opportunity."

Valeria Fedeli also proposed a new outlook on frailty: "We must not only respond to the non-self-sufficiency of the elderly, but also put forward an innovative vision that includes them in society as a resource".

The live broadcast was transmitted on Vatican News: FRAILTY